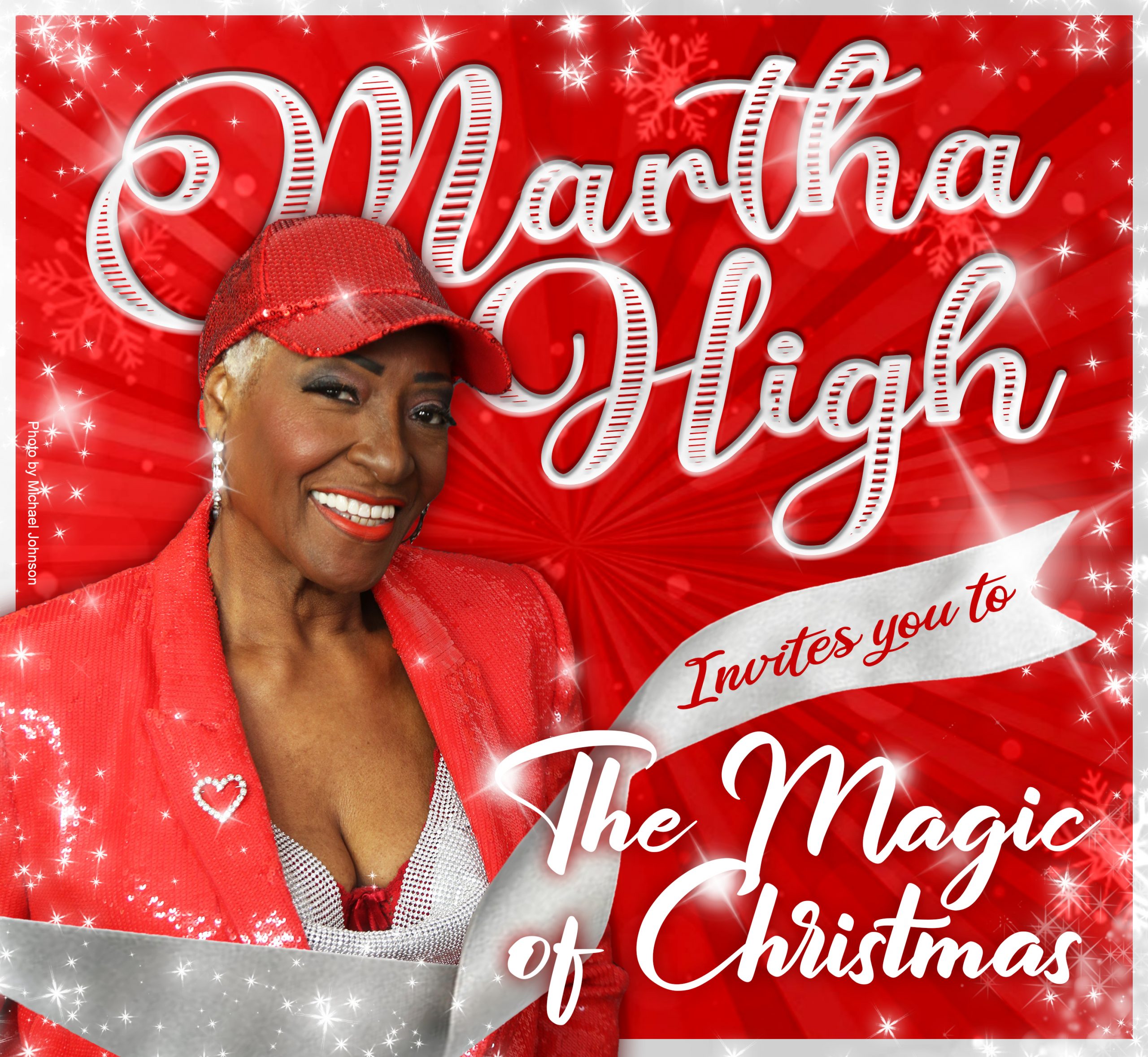 The head of music for londonfm.digital said that he loved the new single ‘Last Christmas’ from ‘Martha High’ with its soulful, groovy, classy and melodic production, uplifting warm vocals and huge dose of Christmas spirit, a great 2022 Christmas cover of a great song. The song has been placed on the londonfm.digital playlist and will be played throughout the day and night on the A-List + as a special Christmas powerplay every day at approx 5 PM UK time every day for a month or more.

Miss Martha High is an internationally acclaimed performer, author, vocal instructor, radio talk show host, and artist. She was discovered by The Godfather of Soul, James Brown, at the age of 18 in the mid-1960s while singing with The Four Jewels at the world famous Apollo Theater in New York. They later become The Jewels after Mr. Brown invited them to join him on the road with the James Brown Revue. Martha Harvin was renamed Martha High by Mr. Brown and later crowned her The Goddess of Soul. She performed with Mr. Brown for 32 years and has the distinction of having worked with him longer than any other singer.

Miss High has spent the last five decades entertaining audiences around the world. In addition to writing a book, she launched her own radio show, It’s High Time, in 2020 on studiowbuzz.com, where she interviewed musicians and celebrities with whom she worked and collaborated throughout her career. Today, she has been invited by television industry professionals to develop her own talk show. Miss Martha High & Friends (working title).

Amid her success with Mr. Brown, she joined other legendary artists on stage including Michael Jackson, Bo Diddley, BB King, Fred Wesley and Maceo Parker, and was featured in The Blues Brothers film and the television series, New York Undercover.

After working with Maceo Parker and his band for 16 years, she has become a highly sought-after performer and currently enjoys a successful solo career. She performed for audiences around the world in addition to giving special guest performances on over 50 television series featuring world renown hosts like Johnny Carson, Don Cornelius (Soul Train), Jay Leno, David Letterman, Arsenio Hall, Jerry Springer, and Jonathan Ross. She is also one of the best live performers in the business and has taken the stage at the Montreal Jazz Festival, the Indianapolis Jazz Festival, and many other live events throughout the U.S., Europe and Japan.

The Magic of Christmas
A Holiday Celebration of Love, Culture and Humanity

Since the beginning of her career in the 1960s, Martha High feels privileged to travel around the world to entertain audiences who love her voice and feel the spirit of love she conveys each time she steps onto the stage.

“I am so blessed to have sung on countless albums with the best of the best. When I started releasing my own albums I kept thinking that I’d do a Christmas album someday,” Martha said. Her producer and friend, Michael Edell, said he’d be honored to produce her next album in time for the holidays and that was it!

Martha and Michael began working on a list of Christmas songs in the Summer of 2022, borrowing from the classics to contemporary sounds. Martha said, “We just had to do Santa Baby, but I wanted to put a different spin on it. The Christmas Song is one of my all-time favorites. We then added Wham’s Last Christmas upon the recommendation of a friend, so I asked Michael Edell to make it real soulful to make it stand out and he did just that!”

Another of Martha’s dearest friends is author Dr. Yemaja Jubilee whose books feature many of Martha’s artistic paintings and sketches. Martha told Michael, “Dr. Jubilee has written a song that we must do on our Christmas album!” Dr. Jubilee contributed It’s the Most Wonderful Time of the Year, which is an invitation to celebrate love, culture and humanity during the holiday season.

Martha’s joyful voice combined with Michael’s infectious reggae groove delivers the message ‘on fleek.’ Martha’s version of Donny Hathaway’s This Christmas takes the song to the next level. The”Shake a hand. Shake a hand” chorus at the end makes you beg for more. The new ballad, Why Don’t You Come Home for Christmas, evolved from an idea for a melody Martha that left on a voicemail message to Michael. The song became a soulful plea from a woman wanting to be with her lover during the holidays.

No album by Martha would be complete without a nod to her boss, mentor, and friend — the Godfather of Soul, Mr. James Brown. Martha along Grey and the Hit Me Band honor Mr. Brown with a rendition of his recording of Santa Claus Go Straight to the Ghetto – a tender reminder to Santa that children living in poverty deserve gifts too. Finally, Martha along with Grey and the Hit Me Band, escort a very funky Jingle Bell Rock down Basin Street in New Orleans and then all over the world as Martha shouts the names of some of her favorite cities here and abroad.

The album opens and closes with Greetings — a personal message from Martha, then closes with Blessings — a heartfelt message to her thousands of friends, family and fans all over the world. She felt the album needed to convey a sense of community in today’s world.

The album has already received rave reviews on social media. Martha says, “I hope everyone who listens to my album will feel a renewed sense of joy, love and the desire to celebrate the many gifts we have to share”.